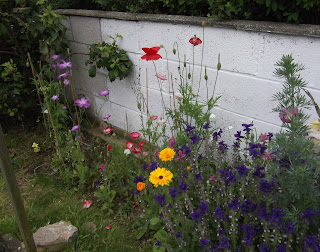 I didn't realise that it's been over a month since I last blogged .. .. so much has happened and yet at times it seamed that nothing was happening at all!  The weather has been so wet and windy it's a miracle that my little wild flower patch has bloomed at all, however, finally there are flowers but I've had to put in a few canes to keep them upright.  My friend Jacqueline gave me some seeds from her poppies and they have flowered too - much to the delight of the local bumblebees. 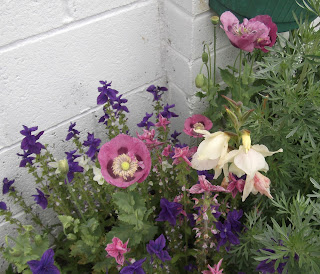 They are a beautiful pale plum colour and look stunning coming up amongst the painted sage from seed collected from the plants in my old garden before I moved.  Strange that most of them have come up purple, with a few pink and the odd white one - the parents were more evenly mixed. 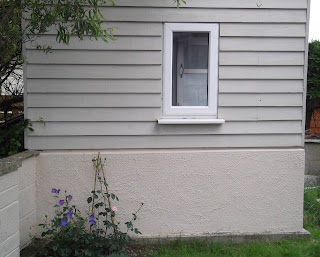 I have been very busy painting - remember the shed from a few months back, the wood was a poopy brown colour!  After 4 coats of paint it is now a nice neutral stone shade and I have started to plant up a border around the sides.  First in along with the buckets of well rotted from a kind neighbour who keeps chickens and horses, was the geranium Johnson's Blue and a climbing rose called Penny Lane.  I will have to get some rose wires fixed to the sides of the shed, especially as my DH has just given me another rose to climb the other side of the window, but I'm waiting for the builders to finish before risking it going in - I should hate for them to accidentally trample it or drop something heavy as they come around to the new extension.

Talking of builders, after several delays we finally have things moving again and the end is in sight .. .. my new laundry room is functional although still needs the sink plumbing in and the electrics to be connected.  I spent a whole week painting the walls and ceiling several times and grouting the floor tiles that Jason laid for me, now it looks lovely and bright and clean even though the only natural light is from the half glazed doors leading in and out.  A piece of worktop left over from the kitchen fits perfectly and I rescued one of the old kitchen wall cupboards to put on the wall - and another slow process of 4 coats of paint to cover the orangey doors and turn them white!  Today the door into the garage has been blocked up so my craft area is almost ready to be occupied - more painting first though!  The two new bedroms have been plastered out and will also soon be ready for paint, and the new bathroom is coming along nicely .. .. with the new toilet sitting in the middle of the lounge since it was delivered this afternoon!  I have given up dusting unless absolutely necessary for health or sanity, and with a hole to be cut through into the lounge so we can get to the new bedrooms and bathroom - it can only get worse before it gets better.  I hope that by the end of the summer I shall be settled, come August BH weekend it will be a year since I arrived here and although there will still be a lot of alteration work needed in the old part of the bungalow, having a nice new bedroom, a bath to relax in, and a craft area to escape to will, I am sure, make a huge difference.

Whatever you are doing this summer, I hope you have a lovely time and the sun shines for you.
Posted by Annie at 9:08 pm 8 comments: