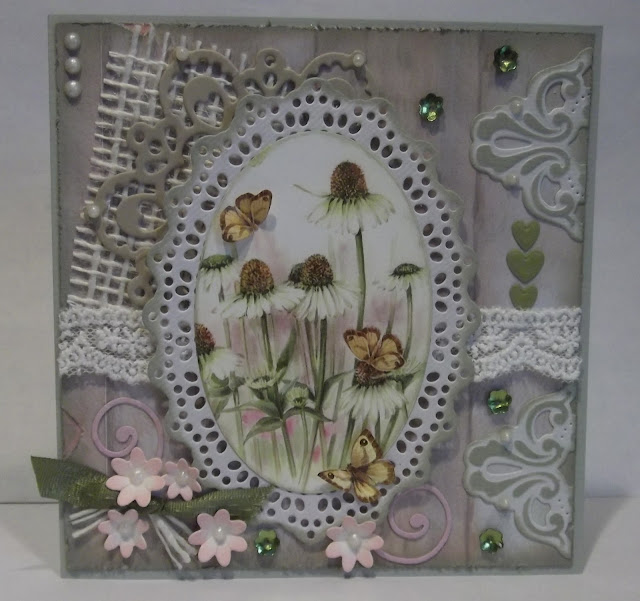 Hello there!  It's time for our next challenge at Cute Card Thursday, this time we want to see some flowers on your creations - stop by the blog to see what the rest of the DT made and read all about the prize.

I just have the one picture for you today, the camera isn't playing ball on the close ups and this one is a bit off on the colours - ah well!  I've used another pretty picture from the Mattie's Flowers cutting sheet, the picture is actually a circle but I've cut it into an oval to fit the pretty Marianne Design lacy frame CR1204.  The background paper is a sheet that looks like floorboards from the Country Style paper pack, I've roughed up and inked the edges for a more rustic look as well as inking the edges of the picture and lace mat.  To embellish I raided the bit boxes and found the little green hearts, lavender swirls and flower sequins.  I've cut a fancy MD die cut in half to decorate the edge of the card, inking the embossed areas to tie things in.  And I found the snowflake circle die already cut out in my bit box ready to tuck in behind the picture on top of a piece of jute ribbon and length of lace.  I've die cut a few tiny flowers with the tiny flower strip die then finished off with scraps of ribbon, twine and liquid pearls.

Thanks for stopping by again.  I'm feeling a little overwhelmed at the moment with trying to look after Mum as well as the house and garden - and finding time to craft and catch up with blogging, Facebook etc.  I really appreciate the visits and can see from my stats that lots of ladies are stopping by - so thank you each and everyone.
Posted by Annie at 11:58 am 2 comments: 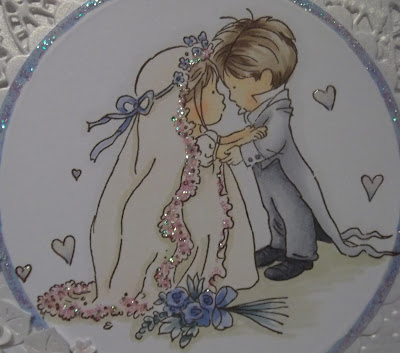 I recently got to play with a couple of my older LOTV Wedding stamps, and this is one of the cards I made.

This image is 'I do!' and I've coloured with my Copics then added lots of sparkle with Stardust Stickles and glaze pen over the hearts. 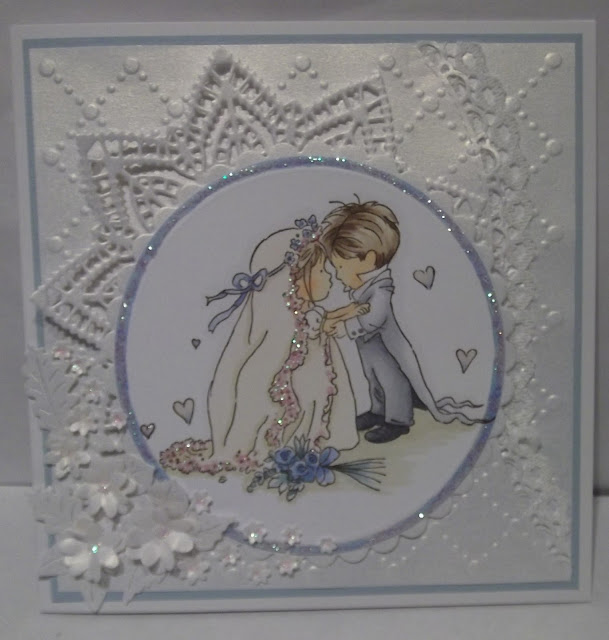 Having difficulty focusing the camera again .. .. and having to take the picture under the cooker hood light as it's back to dull misty days here in Cornwall.  I've used white pearl paper for the embossed background and for my die cuts - all Marianne Design of course.  Here's a close up of the flowers and the list of dies I used: 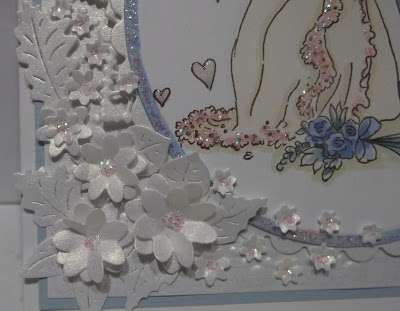 The embossed background I made with the new folder DF3424 called Pearls - it's going to be one of my favourites!

And I've cut a swirl edge with one of the dies in the wave border set  LR0395 tucking a little tiara lace behind.

I've cut the new star doily LR0397 to tuck in behind the image.

The flowers and leaves are cut with the strip dies I love so much, the leaves from CR1336, and the flowers from CR1323.

The Addicted to Stamps challenge is to use die cuts with your stamped design, I think I'm ok to enter with them! And over at Sweet Stampin' the theme is for glitter and sparkle, plenty of that too!

Thank you for stopping by, I'm not sure when I'll be around again but I do have several half finished projects on the go .. .. enjoy the rest of your weekend - and hey! it's brightening up here so I'd best make the most of it and take Izzy for a quick walk.
Posted by Annie at 11:16 am 7 comments: 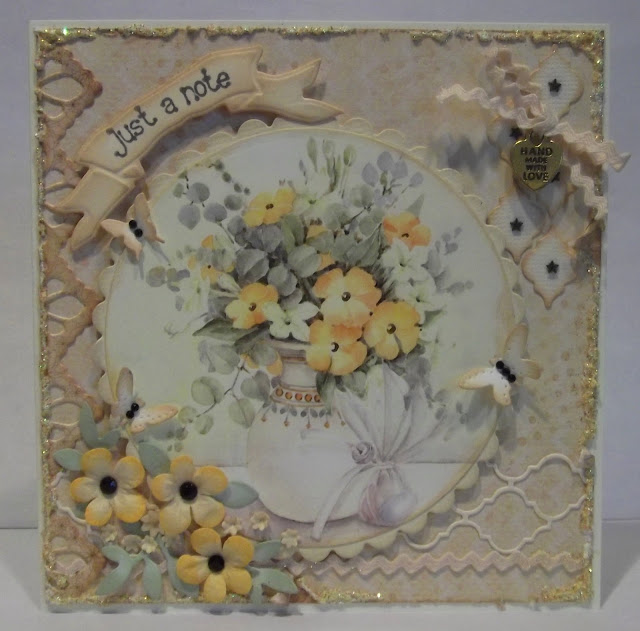 Well I'm actually blogging my DT card for Cute Card Thursday, on Thursday!  And here in North Cornwall the sun is shining, the wind has dropped, the birds are singing and pecking away in my garden - hopefully eating all the pesky bugs.  It actually feels that Spring might finally have arrived, but shhhhh, I shouldn't talk to soon!

So, this week at CCT we want to warm things up, show us something made with warm colours.  Looking after Mum has been a wee bit exhausting at times so I haven't had time to stamp and colour any images lately, instead I've used one of the pretty images from a Marianne Design Mattie's Beautiful Flowers cutting sheet.  I covered my cream base card with a piece of patterned paper from the Country Style paper pack, it's got a subtle pattern but I've added to it by stamping the little dots with Sahara Sand chalk ink, randomly here and there.  The stamp comes with the Party Numbers die set and I just inked without using a block then casually stamped not worrying too much about where the dots went .. .. been watching some of the mixed media clips on You Tube for ideas!

Around the edge I've added golden glitter on top of the 3d snow, then there's little bits of ric rac ribbon and a heart charm, die cuts from cream card and a scrap of patterned paper, and then the flowers - here's a close up:

I've cut them from Mulberry paper then inked the edges with a golden yellow chalk ink, spritzed with water, moulded with a ball tool and when dry added a tiny black gem to the centres to tie in with the picture.  I cut a few tiny flowers from cream card using the flower strip die and, of course, I had to use some of the little butterflies too. I am really liking those strip dies that Marianne is bringing out.  Here's the list of the dies I used on this card:

Thank you for stopping by to take a peek at my card. Can I remind you that the new Marianne Design Divas challenge is now up for the next month with the theme of monochromatic.  I didn't get a chance to create a DT project this time, although this card could almost fit the bill .. .. ..

Now, I've been following the Mixed Media blog for a while now, trying to get more adventurous with my crafting.  The February theme is for glitter, so I am hoping that my mix of glitter on top of the thick snow tex will count, along with the mix of stamping on my background paper, the inking on my die cuts and the different papers will count and I can enter my card with them.
Posted by Annie at 12:16 pm 6 comments: 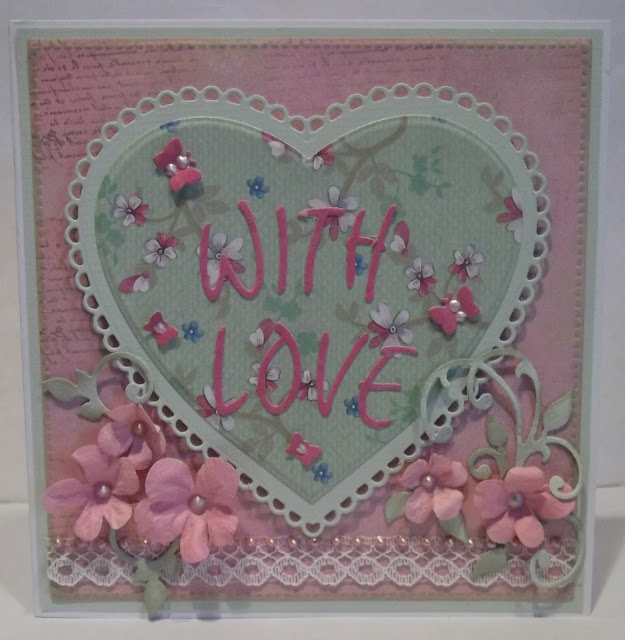 I'm late again!  This week at Cute Card Thursday we are celebrating Sweet Valentine's, please stop by the blog to read about the prize and for more information from the DT.

As my regular readers will know, I'm busy looking after Mum at the moment so crafting has not been a priority.  I do find it therapeutic and must make some time for myself - doctors orders! Thankfully I've been given the green light to go back on HRT so hopefully the hot flushes and aching joints will soon be a thing of the past .. .. had I known what was going to happen with Mum I'd never have stopped it, but hey ho! who knows what's around the corner.

So, my card for the Sweet Valentine's challenge is just a die cut creation with goodies from Marianne Design - I'll give you a list, but first here's a close up of the flowers I made: 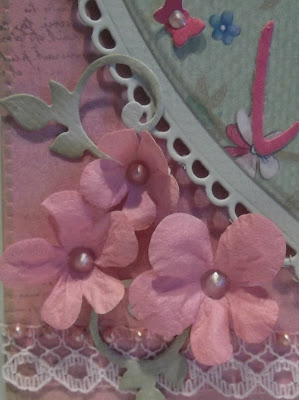 I've cut them from the pink sheet of mulberry paper in the mixed pack, then spritzed and shaped with a ball tool to give dimension.  I've used a Rose Pink pearl pen for the centres and also across my lace and on the butterflies.  Here's the list of Marianne Design goodies with links to the Buddly Craft shop - just in case you want to go shopping!

I hope you like my card.  Thanks for stopping by to take a look.  I've not been on the pc for several days so not sure if there are any challenges I can link up to .. .. please let me know if you see any!

I see that the Marianne Design Kreadivas blog challenge theme is for a project with MD goodies and the option of 'love' - so I can enter with them!
Posted by Annie at 2:42 pm 4 comments:

CCT is in the Pink! 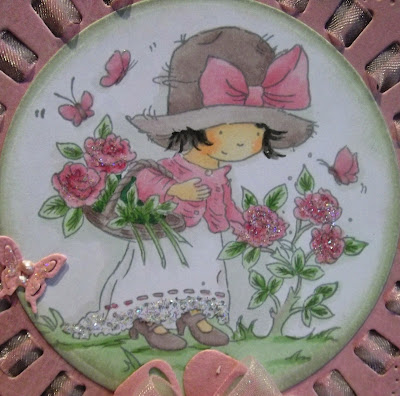 Apologies for being late again sharing my DT card for Cute Card Thursday where we are 'In the Pink!' - so looking for lots of pink on your creations.  Our sponsor is Bunny Zoe Crafts, please stop by the CCT blog to read all about the prize and see what the rest of the DT have created.

I have stamped up one of my older LOTV designs, this is Emma in the Rose Garden, and I used a grey Momento ink for a change to keep things soft.  I've coloured with my Copic pens then added Stardust Stickles to the flowers and hem of her dress, and glaze pen on the butterflies - and it's not showing up!

Here is the card: 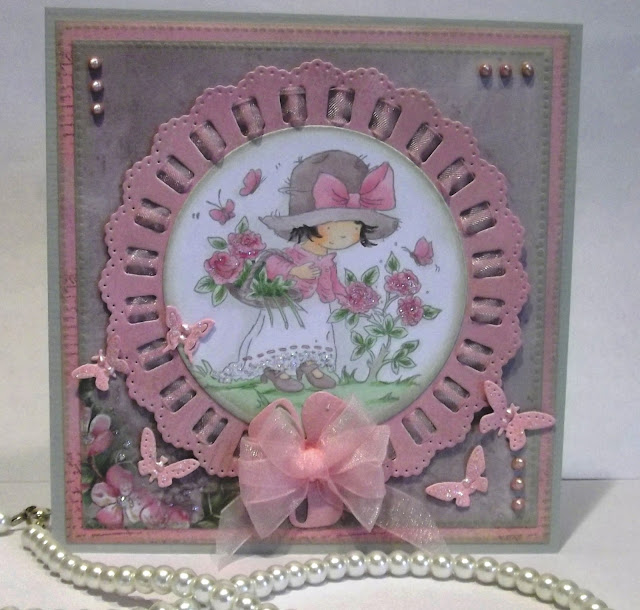 I've used another of the 5" square base cards that I thought looked better with the papers I'd chosen. My paper and die cuts are all by Marianne Design and on the papers I've added the embossed faux stitching then inked the edges with a soft grey/green chalk ink and a touch of Stardust glitter on the pretty flower design in the corner.  The circle is threaded with pink organza ribbon and I've added a quadruple loop bow at the bottom - and that means I can enter a new challenge I found called Craft-Dee BowZ where it's anything goes with a hand tied bow.  A few soft pink pearl blobs finish things off.

The Marianne Design dies I've used are the mini butterflies CR1354 and the ribbon doily with rosette CR1350.  The pretty papers are from the Country Style pack.

Thank you for stopping by to take a look at my card.  Things are still topsy turvey here with Mum but with some improvement.  I have found a decorator to come and finish off the painting jobs I don't have time for anymore, and to re-decorate my bedroom and hang the wallpaper I've had for 3 years - it looks fab!  And with family visiting over the weekend I'm only just getting my breath back - but hopefully it will be a quieter week and I can find some time to play with my craft stash.

Thanks for stopping by to take a look.
Posted by Annie at 2:34 pm 6 comments: