From the Bit Box

Sorry to have been away so long .. .. and I never got to join in with a DT creation for Cute Card Thursday 'Just for Laughs' theme this week, or for the Marianne Design Divas letters and/or numbers challenge .. .. I will try to do better!

I'm still kept busy with Izzy, and thankfully, fingers crossed, I've found a lovely chap to help finish off the decorating in the bungalow.  He also spent time getting to know Izzy and giving me some advice as he used to have spaniels too.  I have to seal the wall behind the bed in the guest room tomorrow (smelly stuff so hopefully it wont be too cold to have the window open) ready for wallpaper to go up later in the week, I hope.

Today I stopped by St Francis and gave them a selection of cards to sell in the office, and they asked if I'd like a stall at the summer fair in July .. .. not sure about that as still need to do a lot more work to get Izzy socialised and happy to meet other dogs, and people! Anyway, they like my cards so that is good to know, and here's another one for them.  I'm keeping things flat, and this one is blank inside so it could be for any occasion.  An old Stampavie stamp, but oh so cute, coloured with my Copics but looking a bit washed out due to taking the picture on a dull day with the lights on. The small square base I'd already got cut so rummaged about and found pieces of Cuddly Buddly digi paper in my print out box and little green stars in the waste jar. Nice when I can use up the old stash .. .. especially as I just succumbed to buying some new!
Posted by Annie at 5:31 pm 5 comments: 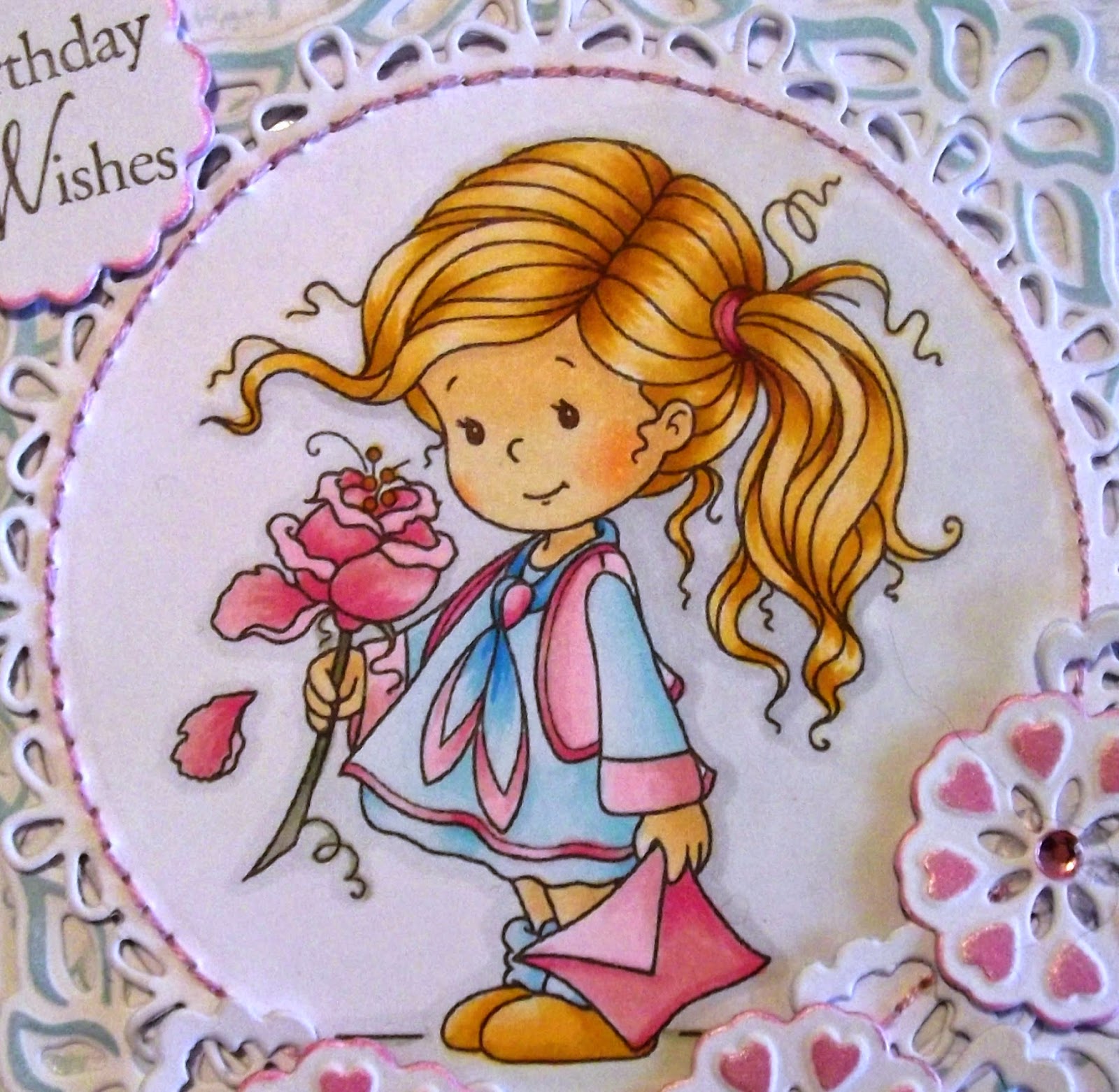 Time for another challenge at Cute Card Thursday, and we would like you to use something new .. .. or perhaps a new idea. Our sponsor is Whiff of Joy, please stop by the CCT blog to read about the prize and see the rest of the DT's inspirational makes.

Well, Santa didn't bring me any crafty pressies, so I had to treat myself! This is little Polly digi from Wee Stamps and I've coloured her with my Copic pens.  Keeping to my resolution to use up what's in my bit boxes, I found I already had the pretty MD background mat cut and inked and after rummaging in another box of digi print outs came across the old piece of Cuddly Buddly paper for the background that would match it.

Here's the card so you can see: 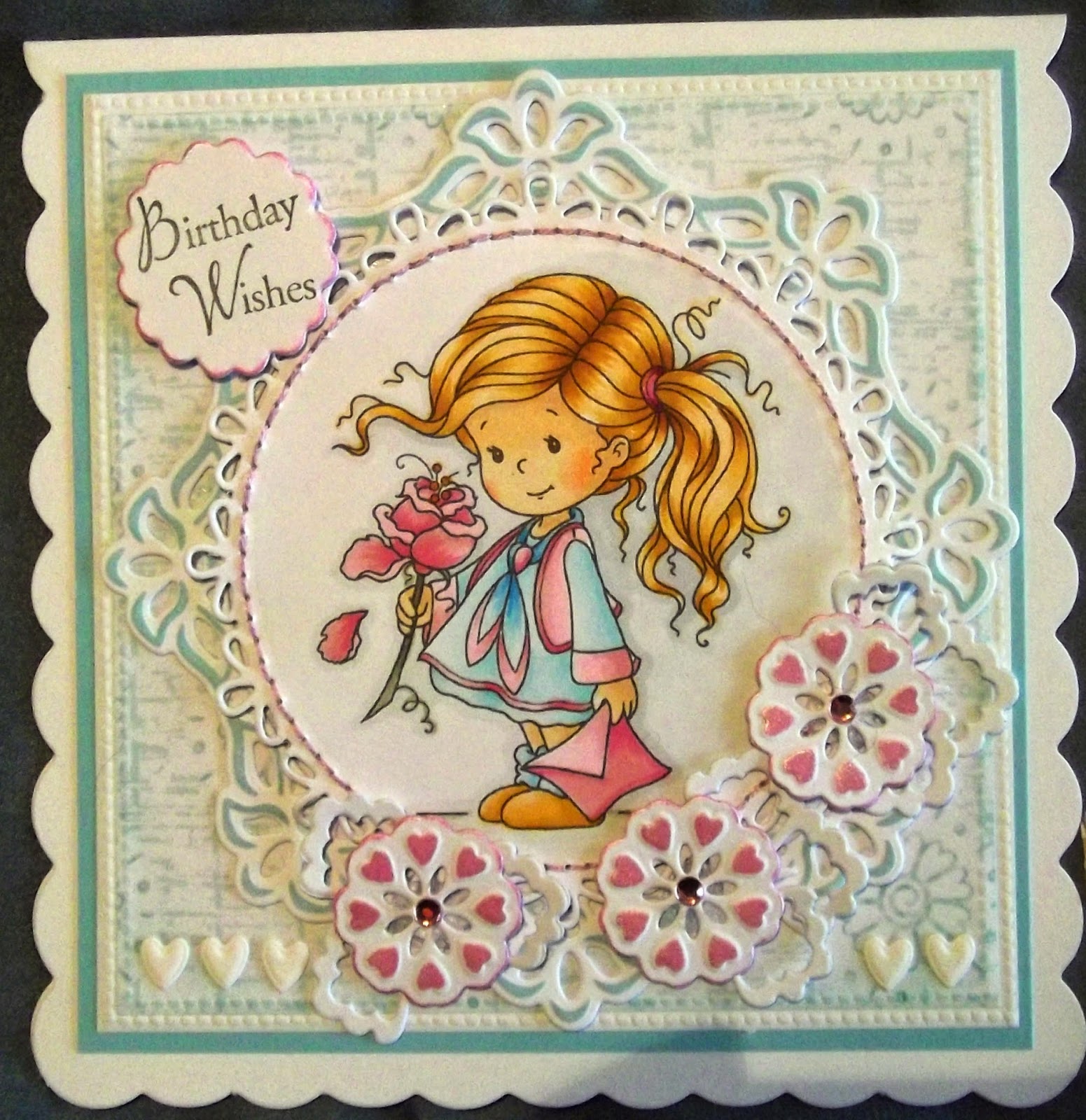 To make the card 'special' I've matted twice, and added the faux embossed stitching to the white and printed layers.  The die cut doily flowers and text mat are from another MD set and the leaves are snips from another.  I've stitched around my image mat with some pink embroidery floss and added the little waste hearts. Nice one! well I think so, anyway.

Thanks for stopping by, I am pushed for time at the moment with a doggy that is desperate for a walk but weather that is iffy, to say the least! Hopefully I can come back later and do some link ups and come see what you've created for our challenge.

Just seen that Moving Along With The Times have a photo of flowers and colours pink and aqua predominant so hopefully my card will be ok to link up with them.
Posted by Annie at 10:21 am 3 comments: 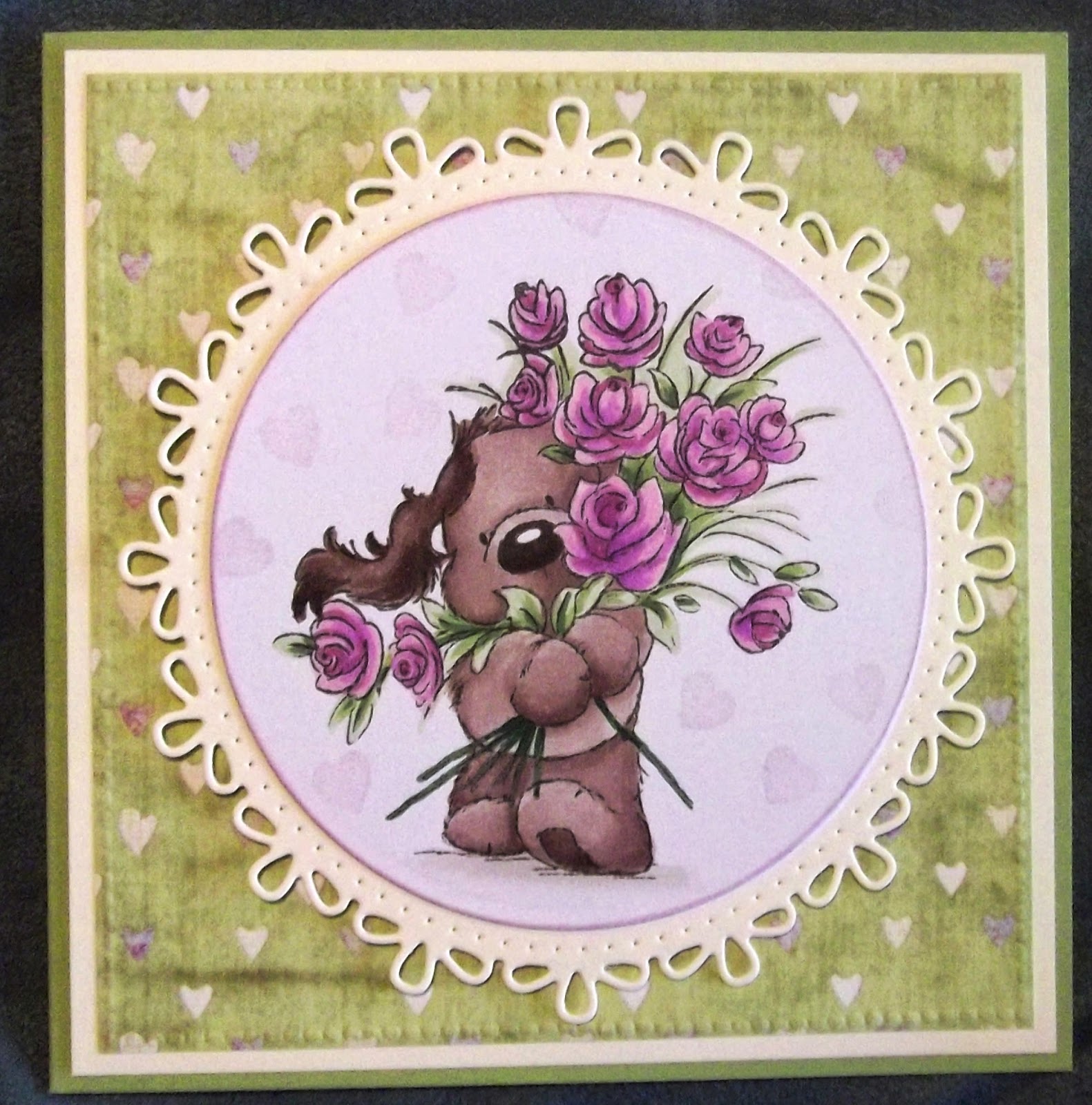 My weekend was quiet so I decided to have several tidy up/clear outs of both my wardrobe and my craft stash!  I've organised the chaos and have an empty choc box with cards that have been started and then stopped for lack of ideas, and a bag of images that are anywhere from just stamped to half coloured.  I've also matched up all my old cards with envies to take to St Francis or another charity and have started to think about what direction my crafting is going.

Well, I love to colour, and I love my Marianne dies, but I'm not made of money and will have to tighten my belt somewhat this year.  Also, I'm not sending many personal cards these days and those that go by post need to be flat and postage friendly, as do the ones I'm going to make for charity, especially as I'm donating them too so wont be able to afford extra little bits and bobs, not that I need any as I have bags of blooms and boxes of ribbon!  So you will find that any cards I make will tend to be flat, embellishments wont be sticking out much and dogs will be a big feature! I do want to try my hand at home decor this year, as a way to use up those flowers and ribbons .. .. ..

Anyway, here are my first couple of cards with little Tilly the dog stamps by Wild Rose Studio (having a dog in the picture means I might be tempted to buy a new stamp - my excuse!)  I've coloured Tilly with flowers with Copics to match the part made card with the pretty Nitwits paper, and then simply fixed the image to a doily I found already cut out in a bit box .. .. one down! 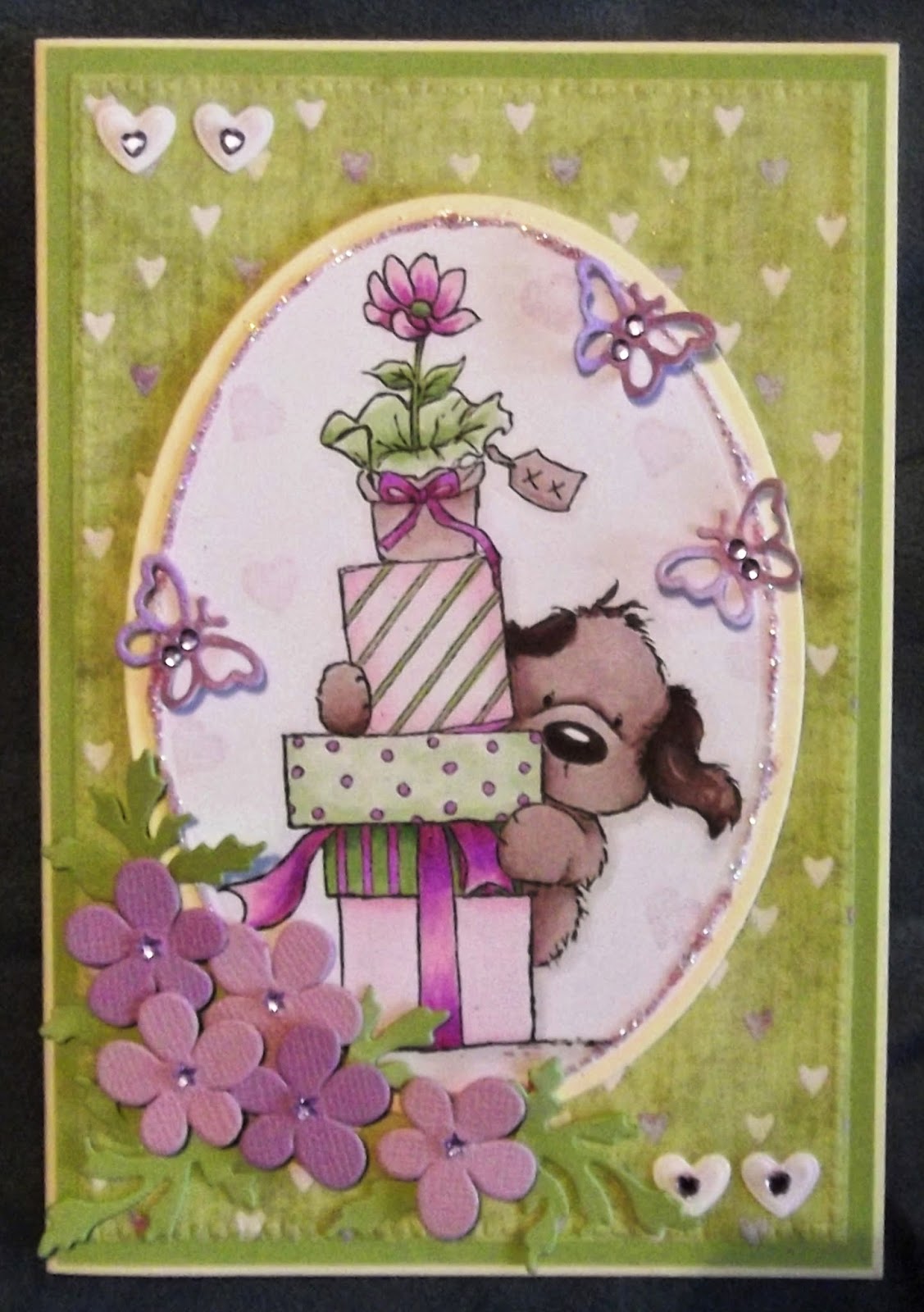 And here's the second one, this time Tilly with a pile of pressies.  I tried adding a little sparkle around the edge with wet glue and glitter from my stash, sort of worked, and decorated with the little die cut flowers and butterflies.  The little hearts are from my bit jar so another pat on the back for me!

Inside each card I've just stamped 'hugs and kisses' that way it could be for any occasion.

The Marianne Design dies I used are:

Hope you like my little creations, if my internet lasts I might be able to browse and find some challenges to link up with .. .. thanks for stopping by.
Posted by Annie at 2:29 pm 3 comments: 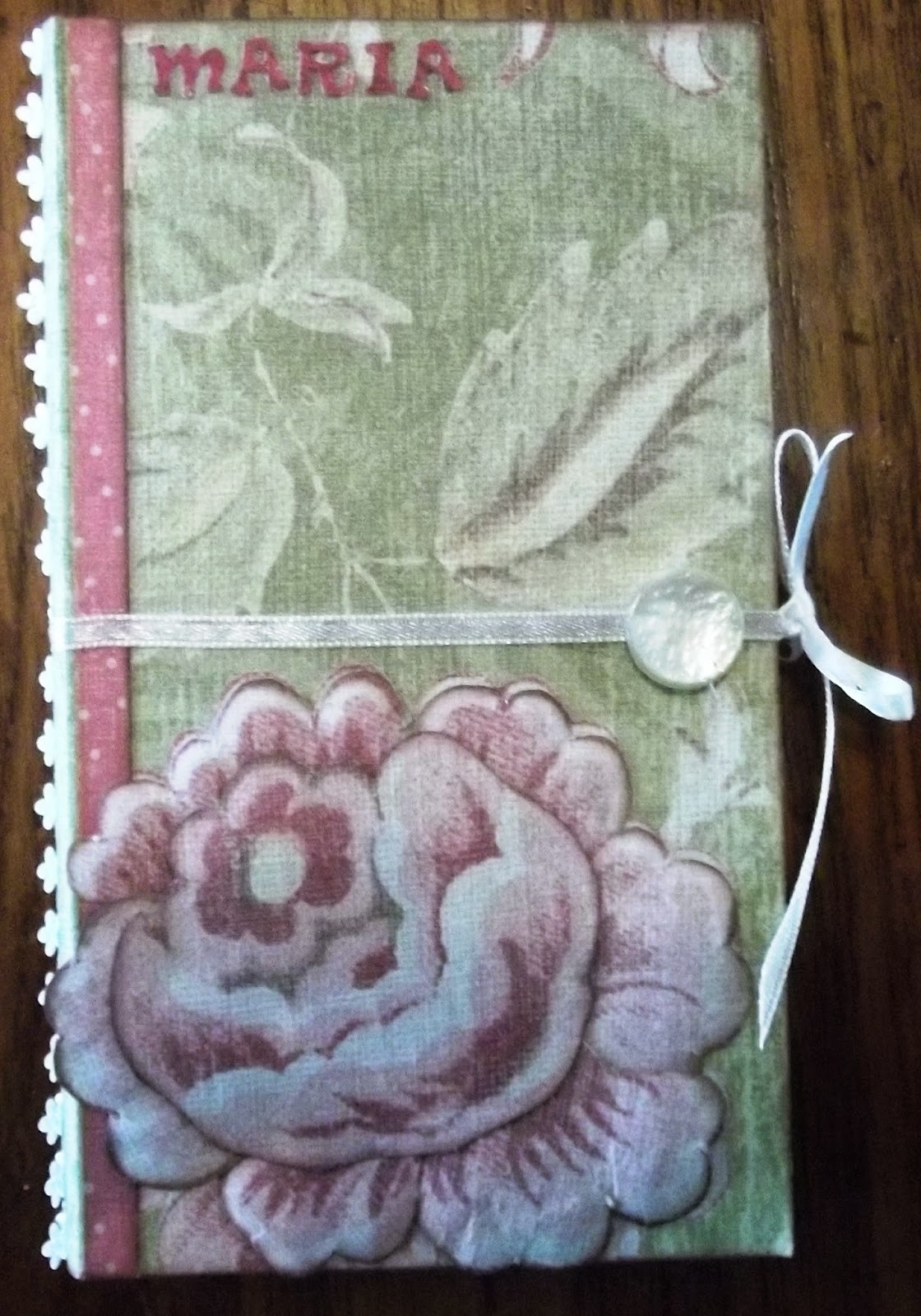 It's another anything goes week at Cute Card Thursday, we guessed you might be busy doing other things and getting sorted for 2015 .. .. I am determined to make a dent in the stash, (didn't I say that last year?) and I think I've found a way of doing that thanks to hours of 'study' looking at YouTube videos!  I made a couple of mini albums for Christmas gifts, the first was for my granddaughter Lauren and I forgot to take pictures, this is the second and I think better made with more room on the spines .. .. but more of that later.  I've used up some of my Classic K&Co 12x12 double sided paper along with odds end ends of lace and ribbon etc.  So here's a peek inside: 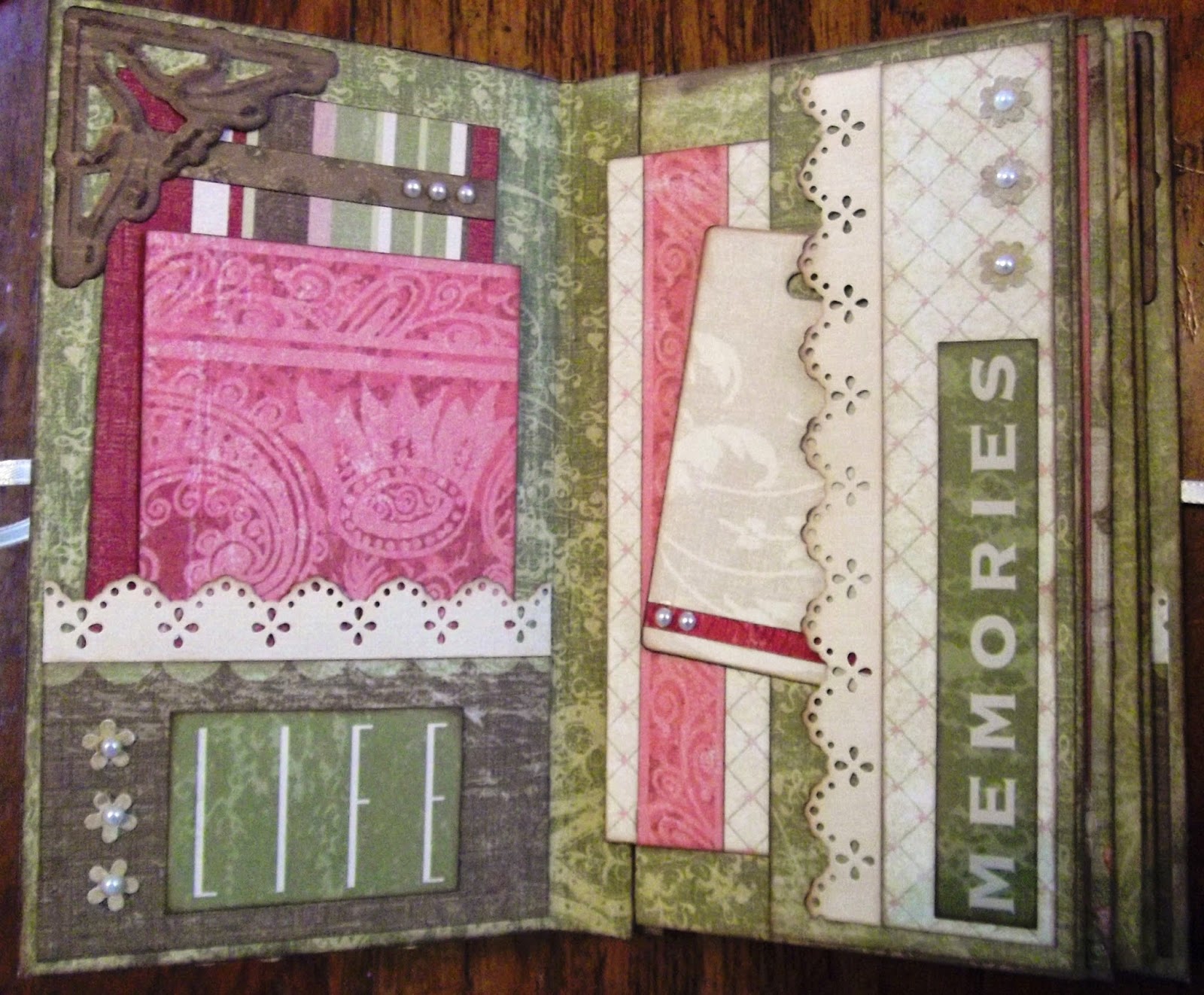 This is the first couple of pages, I think so, but forgot to number them in the pictures before giving the album away!  As you can see, lots of little tags in pockets for adding photos and journalling. I've inked the edges of everything with a soft brown chalk ink, the colours aren't right in my pictures but I had to do the auto edit thingy so you could see the pinks better.  Next page: 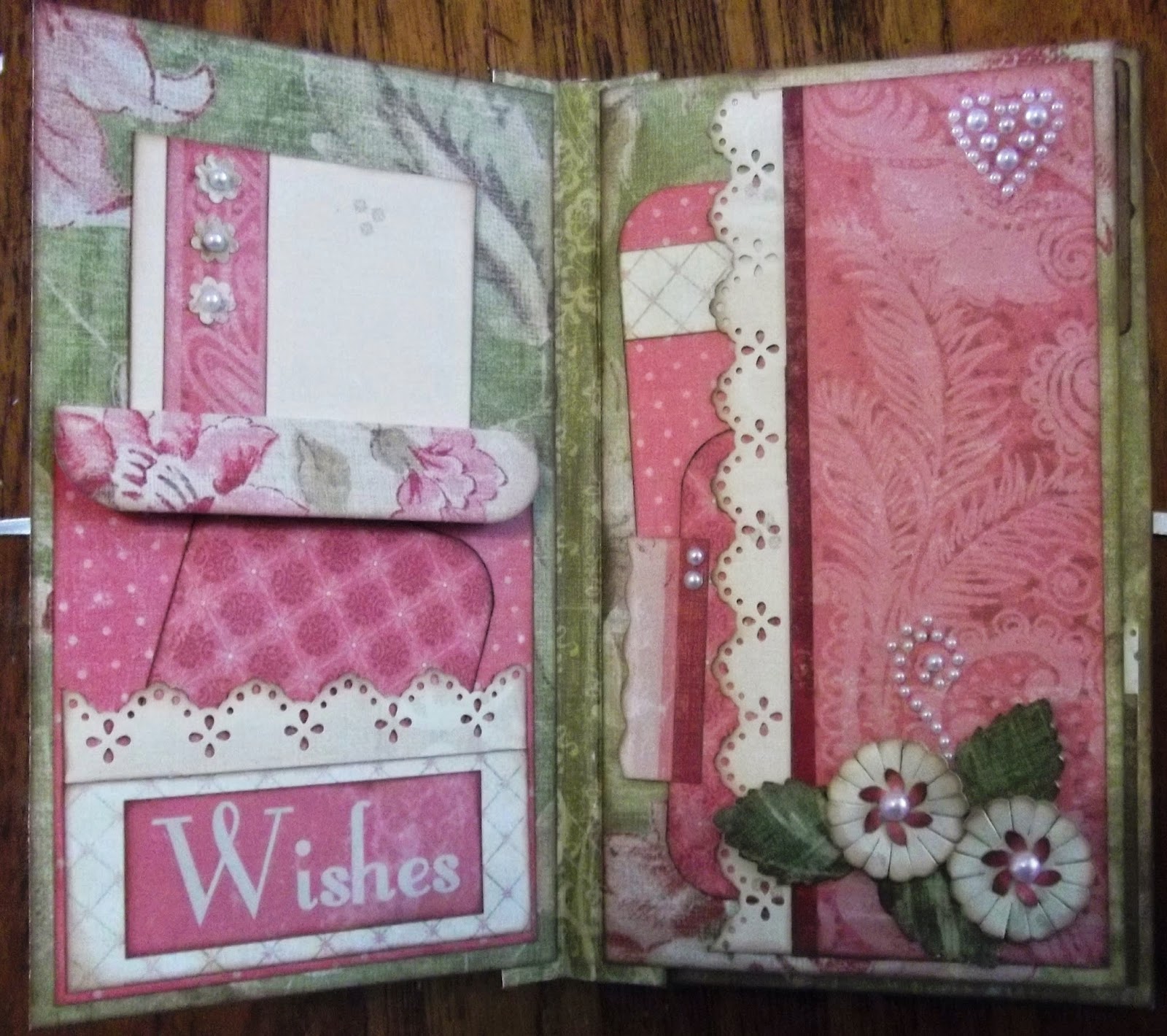 The die cuts are created with Marianne Design dies, the borders cut with a Martha Stewart punch and the tiny flowers are waste from other punched and die cut pieces that I've collected in a bit jar .. .. using it up here! 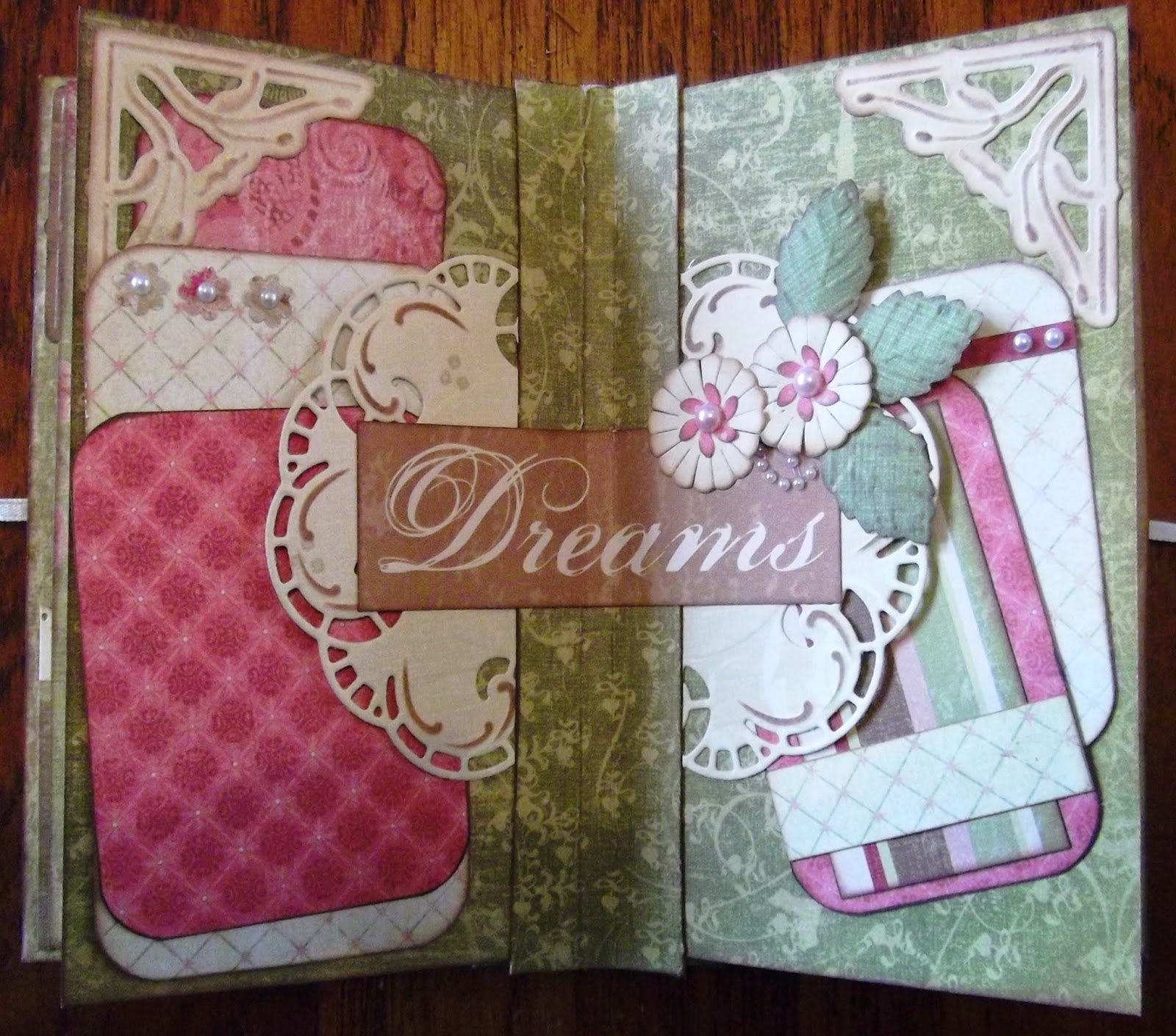 This is the middle of the album and I'm not totally sure about my die cut circle cut in half holding the journal tags, fingers crossed it doesn't all fall out! 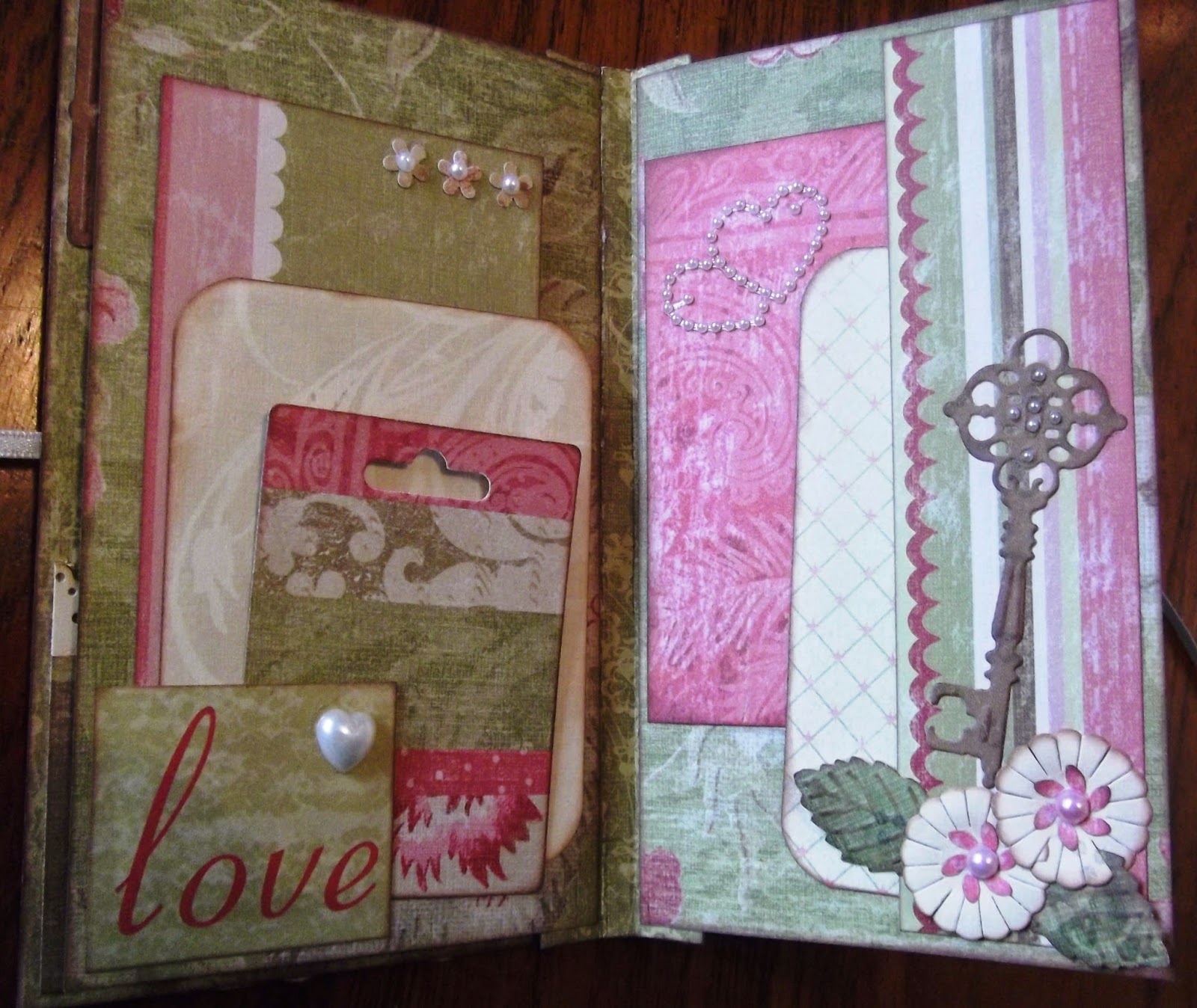 Towards the back now, and more tags, flowers and pearls. 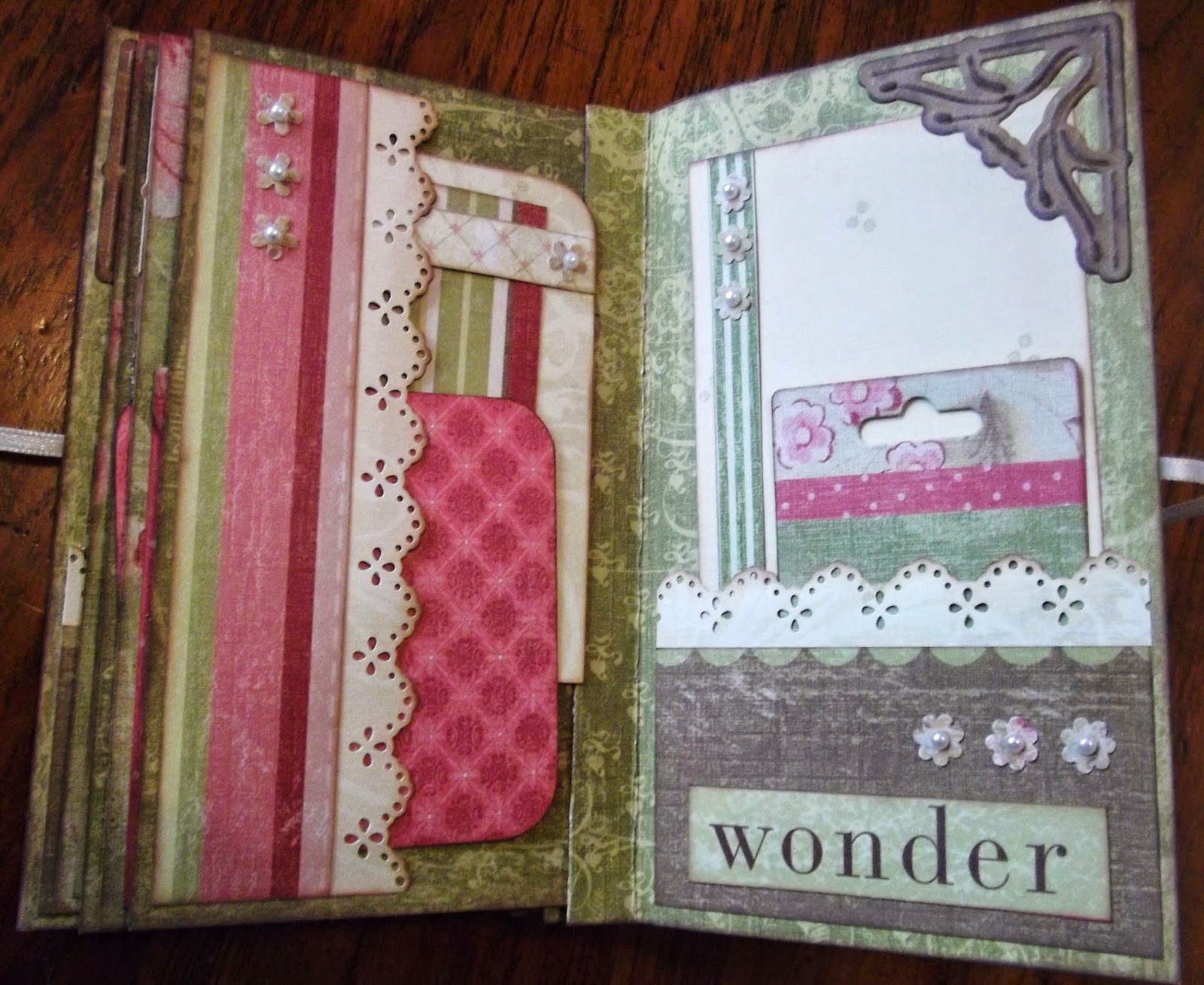 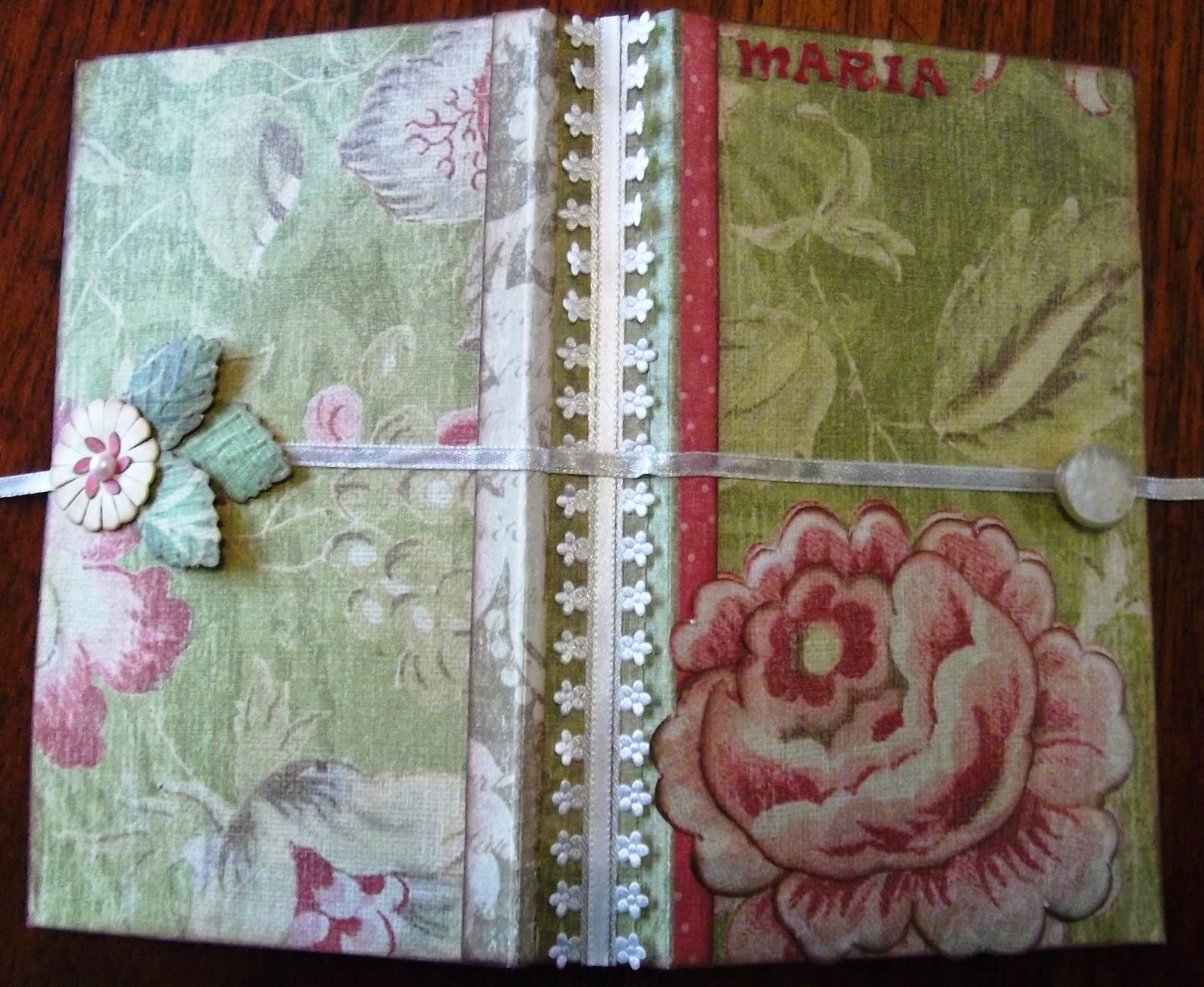 And this is what it looks like on the outside .. .. in hindsight I would have put the ribbon tie under the ribbon down the side, but I was making things up as I went along!

They were fun to make, and quite easy once I got the hang of it. This second version has the spines spaced further apart which makes adding embellishments and leaves room for sticking out bits to fit between the pages. My base album is made in one piece with just an extra layer on the outside of the spine for reinforcement, I think you can make that out in the picture above.  I allowed a quarter inch between the page spines, and each page spine is half an inch and doubled up with red line tape for extra strength.  I started with a piece of 12 x 6 double sided paper then along the 12" side scored at three and five eights of an inch (sorry can't figure out how to type the fractions), then at half inch further on twice, leave a quarter inch for the gusset between the page then score again at half inch on twice repeating until you have 4 lots of half inches with a quarter inch between. Score and stick the half inches together with a strong tape to give strength as you will be attaching your pages to them.

Using double sided paper/card means you only stick one piece to each spine, if you want a bigger album then there are lots of  videos showing the spines made separately with different amounts left between then fixed to a thick album back spine.  Or using a plain card stock for the covers, spine and pages then adding patterned papers over, that way you don't need double sided.  One of my favourite videos is this one for a much bigger album but oh isn't it pretty!

Please let me know if you have a go and leave me a link if you post your project so I can come take a look.
Posted by Annie at 11:00 am No comments: