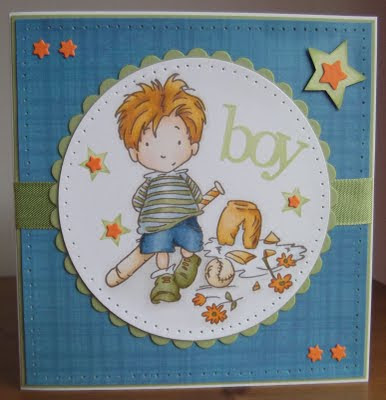 Here's a simple card I've put together with the new LOTV Oops! little boy stamp. He's coloured with Copics and I've used a piece of magazine paper with pricked faux stitching matted with green cardstock for the base, cut a scallop mat from the same card for my image mat and pricked the faux stitches around the edge to tie it together. I've wrapped a lenghth of green seam binding around, stamped the 'boy' and bigger green star with Tea Leaves Versamagic chalk ink and cut out the star to fix with a 3d pad with a smaller punched orange star to zing things up a bit. The smaller orange stars are left over bits from a die-cut border - well we crafters never throw anything away!

Here's a list of some of the Copics I used to colour Oops! - I can't remember all of the details though as I coloured this image last week and my list doesn't seem to be complete .. ..

The only challenge that I could enter is the one at My Time To Craft where you need to include die cuts .. .. well I die cut my image and mat with Nesties and my little orange stars fell out of a die cut so hopefully that's enough, although I'm sure there will be stunning creations with lots more die cut elements than on my little card.

There's little change with my Dad at the moment, which I guess is good. Hopefully he will move into a new room today at the Nursing Home - yesterday when I visited they were finishing re-decorating and waiting for the paint smell to disappear. He will have a proper hospital bed which will make turning him easier and with a back rest so he can sit up without a pile of pillows that keep collapsing. He's still enjoying his food but is missing Mum and feeling depressed knowing that he is just biding time until the tumour invades more of his brain and eventually kills him. I hope that in the future if I am in a similar situation our government will have legalised euthanasia - we certainly would not let our dear animals suffer beyond the point of loss of dignity, quality of life, and knowing there was no hope for the future.