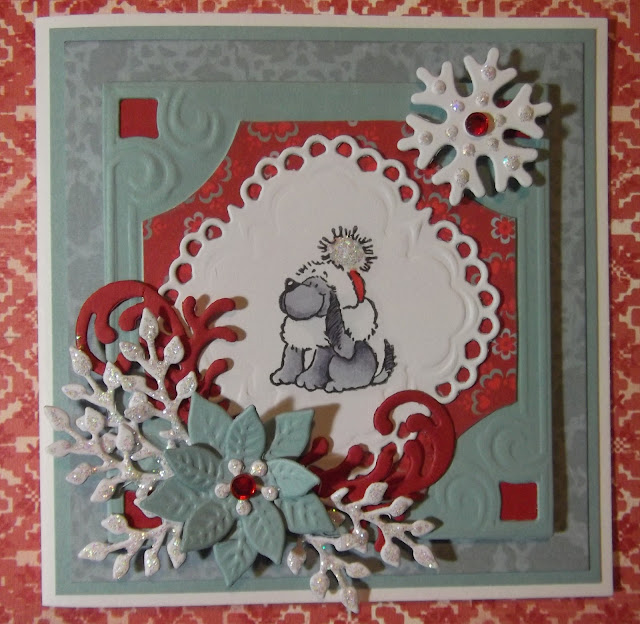 This little 4" square card was snapped last night under my daylight bulb, so apologies for the shadows, but, it's the only card I still have to blog and I'm not sure when I'll get around to putting another one together .. .. gotta get on with the tiling and painting this week or I'll never be able to have that bath!

I stamped the little PB pup and coloured with my Copics, not much colour, just a touch of red for his hat and the BV20 - BV29 pens for the pup.  I've used one of the Marianne dies from LRO234 to cut him out and another to cut out the plain blue mat, then I cut out a piece of red pp from Marianne's Scandinavian Winter pad to fit in the square, tiny scraps of red card behind the corners then 3d fixed over my base layer.  That's a blue piece of pp from the same pad, again matted with the blue card - I think it's SU! Baja Breeze.  To embellish I've used lots of different Marianne die cuts, the most obvious being the mini poinsettia LRO142.  I've added lots of Stardust Stickles over the white fronds, centre of the flower, the snowflake and the pups hat, then to finish I put a little red gem in the centre of the flower and snowflake.  I am hoping that the sparkle and the 'exploding' embellishment will be ok for the Papertake challenge theme of fireworks glitter and sparkle!  Jingle Belles have a creature feature challenge, and I'm just in at the last minute for the Penny Black at Allsorts monthly challenge theme of Animal Magic.

Hope to catch up with you later, but now it's grouting and painting!
Posted by Annie at 10:04 am