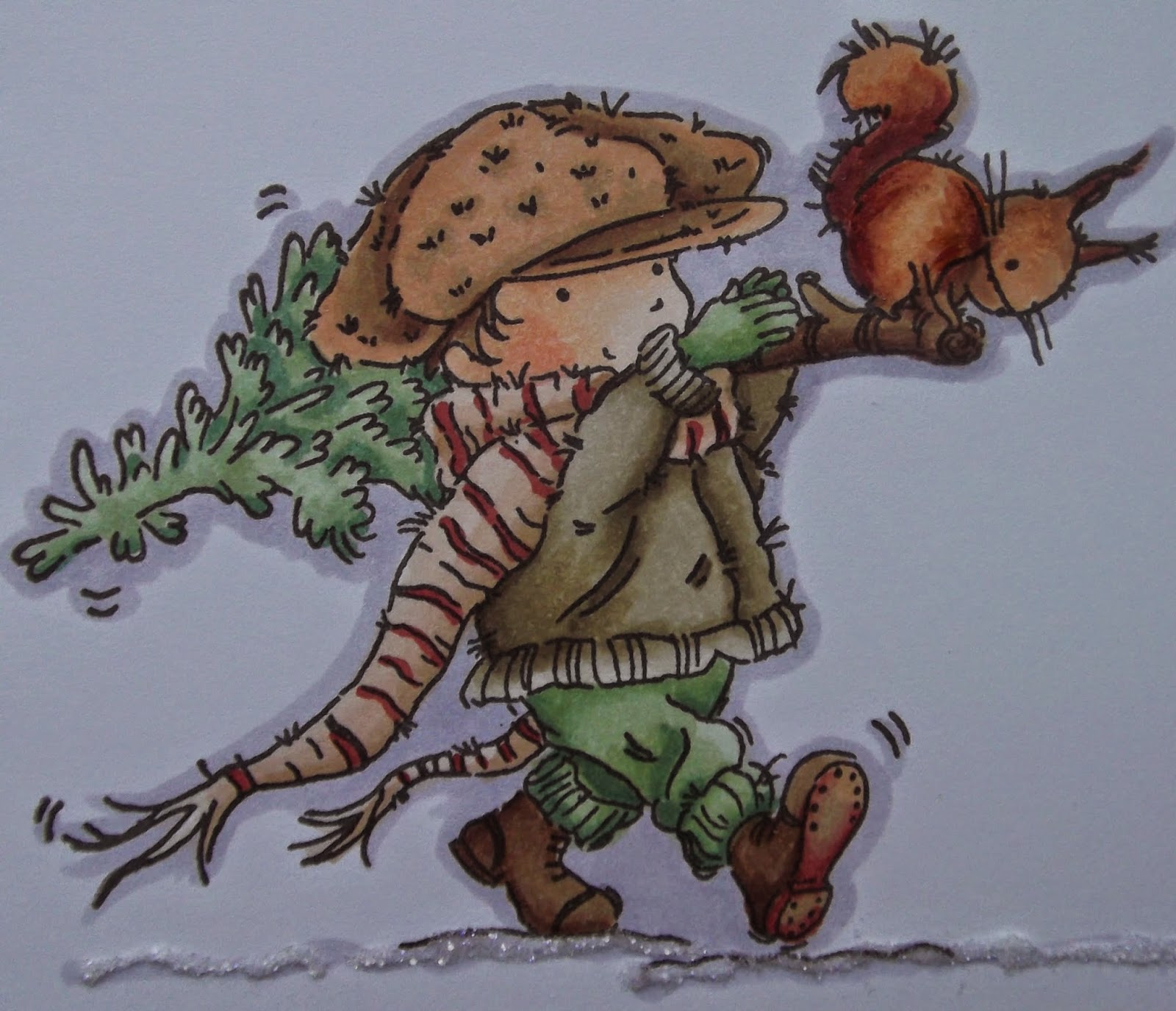 ok then, I have internet .. .. but not sure how long it's going to last so I'll be quick sharing this simple little card with you.  It was made for the CCT blog one layer challenge back in October and I used one of the cute LOTV stamps that I got at the Bodmin craft fair.  I've not been crafting much recently, what with more decorating, family ups and downs and now a new member of the family taking up so much of my time - but more about him later!

I've coloured the image with my Copic pens then added a little touch of glitter for the snow - here's the card: 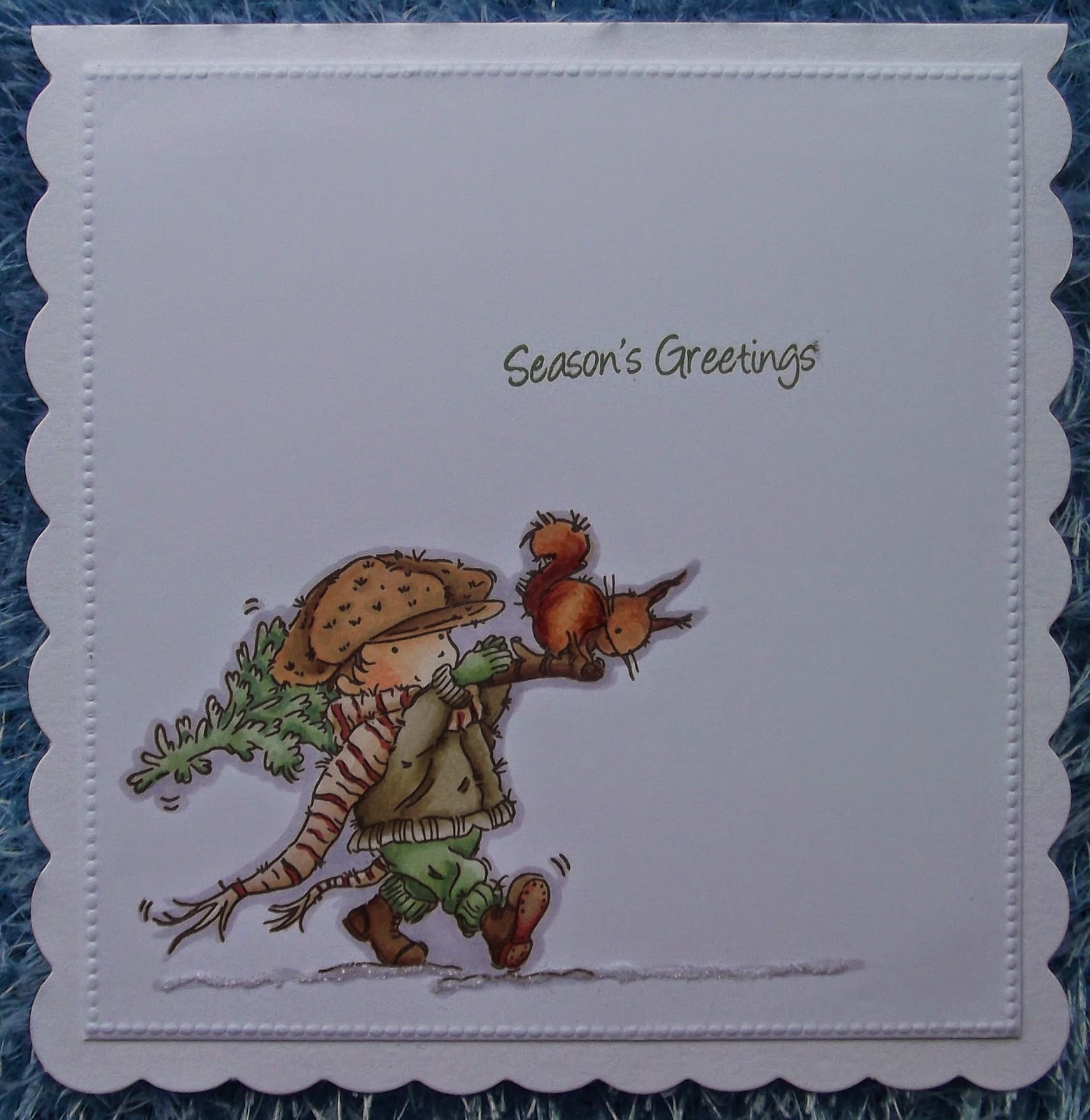 I have had to stamp and colour onto my favourite smooth card then fix it to my base card, so it is a version of the one layer idea! Colouring with Copics they bleed through and my stamping card isn't substantial enough to stand on it's own anyway.  I've simply embossed the faux stitches around the edge then stamped the text to try and hide a blob of ink that must have been on my hand .. .. maybe you wouldn't notice it if I'd kept quiet!

So, a quick introduction to Izzy my new cocker spaniel friend.  I have pictures on my facebook page now and then taken with my Hudl as I can at least use that to check my emails and get onto facebook. Izzy, short for Curtis (another aeroplane make as all my cockers have been named for aeroplanes) is now a year old and was gifted into the local re-homing shelter by his previous owners as they said he was scaring their children!  The poor fellow is scared of his own shadow and yes he does bark at strangers and will go for your ankles if you're not classed as a friend and move to fast! The poor lad was kept shut away when people came to the house so has never learnt to socialise and is fearful of just about every new situation.  He was also living with his litter brother, a rather more boisterous fellow by all accounts who would scare the living daylights out of him, consequently he's also scared of other dogs.  So all in all we have some behavioural issues to contend with, plus there is a question mark over his feeding/health as he has been regurgitating allot.  I've had some expensive blood tests done to rule out anything nasty, and until he gets a camera down his throat to see what's going on the jury is out.  Thankfully the blood tests were negative for anything nasty but he has been labelled as having a large oesophagus causing the regurgitation.  He previous owners when pressed for further information just shrugged and said they thought it was because he ate too fast being in competition with his brother.  There are lots of questions as to what might have caused it, a splinter from a stick getting lodged in his throat, an injury whilst playing .. .. I doubt I will ever know the truth.  Anyway, we have the feeding sussed now, it's just the drinking that scares me when he sounds like he's choking. He is a gentle lamb with both me and Mum and loves to be cuddled, and even brushed when in the mood! He sleeps all night, is house trained, travels well in the car and is all in all a joy to have in my life, so everything else we will tackle together one step at a time.

Anyway enough for now, as I'll try to add my card for this week's CCT challenge that I've managed to join in .. .. catch up as and when .. .. and if the internet holds I might even see if there are any challenges I can link up to as well.