A bunch of roses 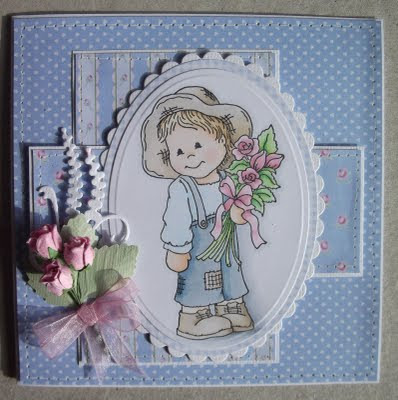 It's been a worrying few days and I've not got much crafting done. All kinds of minor hassles were sent to try us, but worst was the worry about my Dad's health. He has had problems with his eyes for a while and last year had both cataracts removed. This seemed to 'cure the problem' but over the past couple of months he's been complaining of pain over one eye and the optician refered him to the hospital consultant .. .. he referred him to the neurologist as he thought Dad may have had a mini stroke. That was ruled out with blood tests but now over the past couple of weeks things have got much worse with Mum worrying he may be suffering from dementia. Finally, yesterday the doctor called and thinks that there is a combination of factors in play, not least being his eyesight, and is referring him back to the hospital for further tests. My mum has been worried and I was frantically cleaning house just in case I had to drop everything and go down to her - she doesn't drive so with Dad being incapable of driving they are reliant on neighbours to take them to doctors appointments and for shopping trips. We will try to visit more often, but of course the added stress is not good for my ME, but that can't be helped.

So, this is the first card I've managed to put together in days. I had the Bildmalarna little lad stamped and coloured for some time but can't remember the exact Copic colours I used, plus taking the picture by my craft room window in the bright morning light has washed out the colours a little anyway. The papers are from Kim's cottage collection in sapphire at Cuddly Buddly, matted with textured white cardstock and given a white line and pricking faux stitch edge. The flowers were a birthday present from my dear crafty friend Linda and I simply added a Marianne swirl, 3 punched leaves and a double bow organza ribbon that was originally white but I coloured with R81.

Having been away from the blogging world for a few days I'm not sure what the challenges are all about at the moment, but I did find out that the Stamptacular Sunday blog have a pile it on theme - they want at least 5 layers, so if you count my mats I've got that and more. My card layout is similar to the sketch on the Sweet Stop blog although my oval is vertical rather than horizontal and over on the i Copic Lover blog the challenge is for pastels - I'm making a guess but am pretty sure that I've used the E40 -E43 range for the little lad's shoes and hat, B90s for his trousers and BG0000 mixed with B91 for his top with RV000 and R81-85 for the pinks. His hair was most likely the pale E50s, or maybe pale E30s, and skin tones would be my usual E000, 00 & 21.

I have to get a move on now and try and make my next couple of cards for DT challenges in case I have to disappear again. I will try to catch up soon - promise!