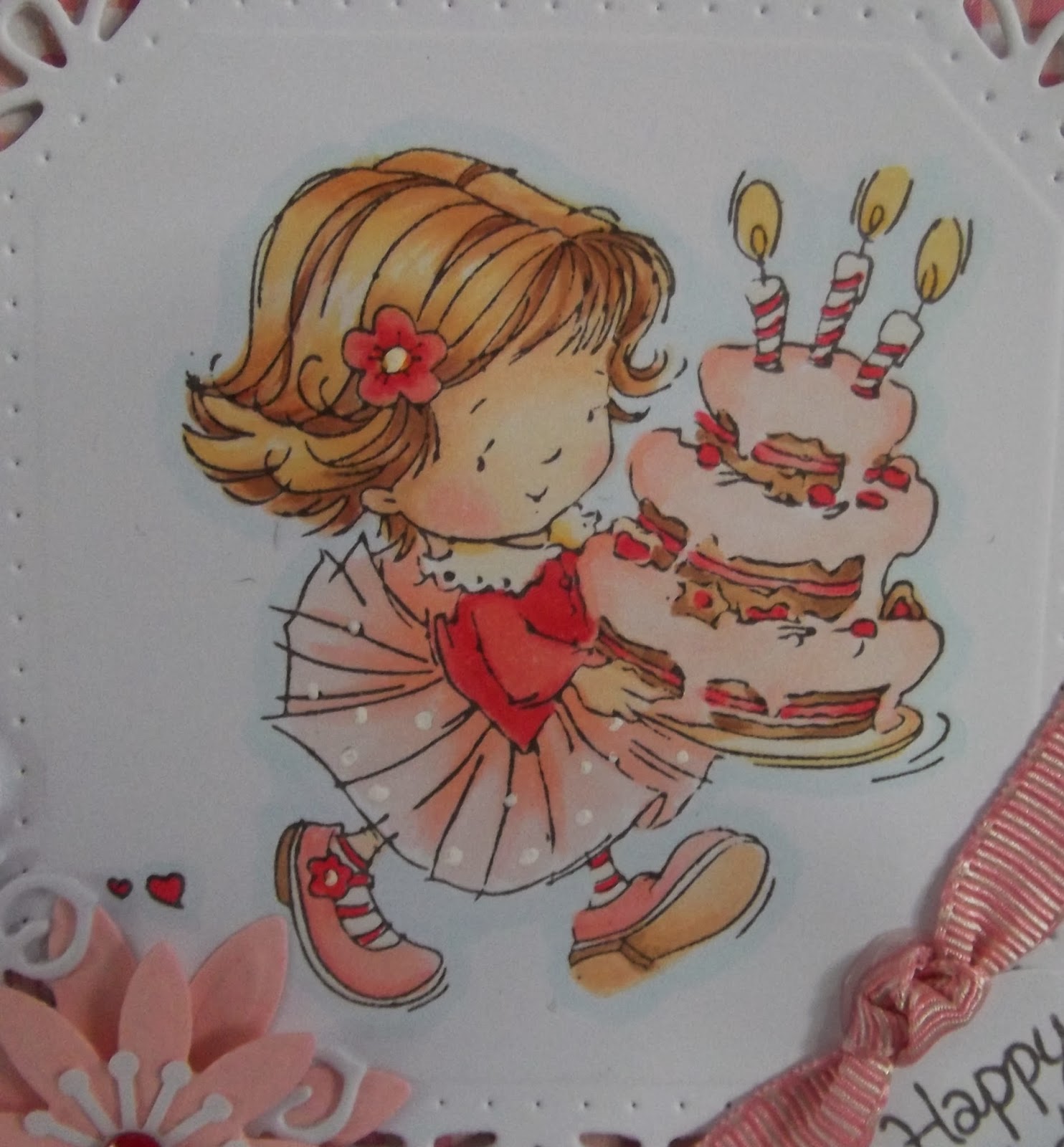 It's Thursday so time for another challenge on the Cute Card Thursday blog, and the theme this time around is 'So Sweet'.  Do stop by the CCT blog to read all about it and see what the rest of the DT have made.

I've been in tidy up/use it up mode again, and this little cutie is a Nellies Choice stamp I've had for ages that was already stamped up, although not too well, so it was simply a question of colouring her in with my Copics.

Rather than add layers with mats for the image I've simply cut her out with a pretty Marianne Design die - still trying to keep things flat-ish! 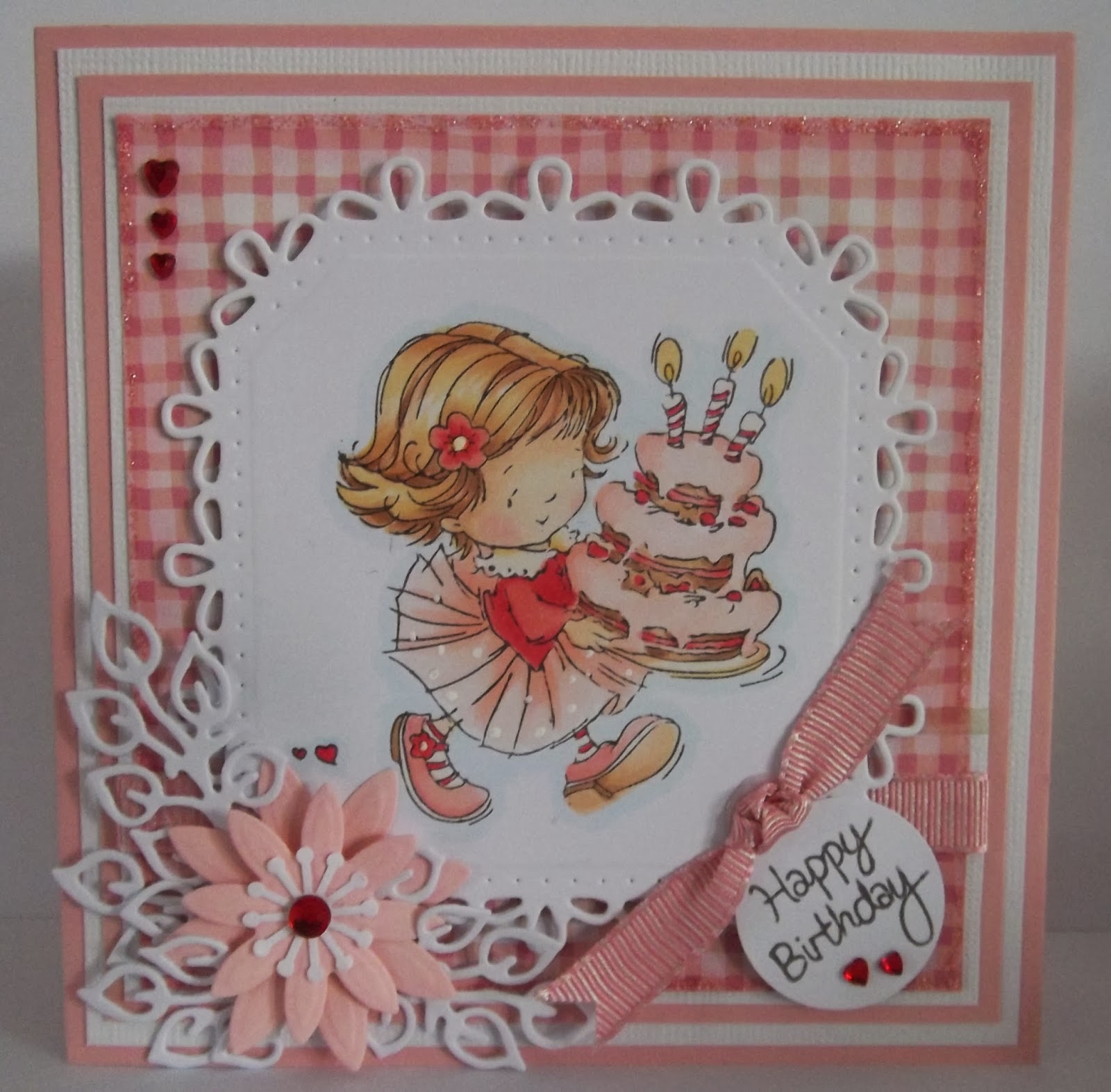 Here she is on the card.  I already had the coral gingham inked, glittered and stuck to a piece of white card, but with a strip of lace that didn't go .. .. so I peeled that off and substituted the ribbon.  I just noticed in the picture that a little of the original tape is showing so I've moved the tail of the ribbon knot over it, there was just enough sticky left to hold it.  The coral pink card is more from my SU! stash and as the image is quite small I was able to keep to a 5" square base, even with the layers.  Although I have used 1mm foam pads to layer up the image, flower and text, everything else is flat so it might squash down for the slim slot at the post office.  I finished off with the little red heart gens and had just enough coral gingham paper left to add a match inside the card too, with a greeting stamped onto a corresponding MD die cut shape.

Stampin' for the Weekend have 'Happy Birthday' as their current theme so I'll enter my card with them.

If I'm AWOL from blogging it's because I'm trying to work in the garden when the weather and my health allow .. .. I'm waiting for an estimate to level and gravel the front area where the builders had all their kit, the idea of a vegetable plot has been shelved as I'm just not going to be able to look after it on my own.  The area at the north side that was going to be a car port is now looking more like turning into a shady shrubbery with a utility area created with left over gravel and slabs by the water butt, shed and compost bin (when I move it).  The rose bed at the front of the bungalow needs serious attention, my idea of just raking back the gravel and adding some lavenders around the edge has had to be re-thought.  The soil is compacted clay .. .. yuk!  So, I am thinking of moving the gravel completely (it will go in the utility area) ditching the weed membrane and then have the job of forking in tons of soil improver and grit to make it suitable for the lavenders and the dianthus that I need to move to this sunny spot.  It will mean another area to weed by hand but once the plants are settled in I'm hoping it'll just be a case of hoeing and mulching.  However, until a strong armed man turns up to move some paving slabs about in the utility area and help me take up the turf/weeds, I'm kinda stuck .. .. itching to get on when the weather will let me but annoyed that I don't have the strength to do it all myself.  Ah well .. .. there's still plenty of doors left to paint inside!
Posted by Annie at 11:21 am