Out of this World 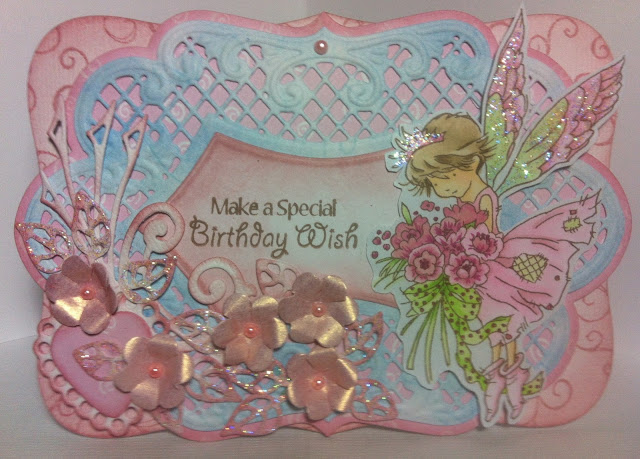 This week our theme on Cute Card Thursday is Out of this World, and we are sponsored by Rick St Dennis.  Rick kindly gave some of the DT a few digi designs to play with, and we are joined this week by members of his DT sharing their creations.  Do stop by the CCT blog and take a look at all the amazing samples and read about the prize.

I have chosen to use one of my older LOTV fairy stamps to create my card, along with a selection of Marianne dies and a base tent fold created with Spellbinders labels 8.  Unfortunately my camera ran out of battery power when it came to taking the picture and I had to get my son to snap the card with this phone, and the light is reflecting off the flowers rather too much and not enough sparkle is showing up on her wings, tiara and the leaves.  The fairy is coloured with my Copics then touches of sparkle added with Stardust Stickles before being fussy cut and fixed to my card with 3d tape.  I've inked the edges of the base as well as adding the swirl design (an old Magnolia stamp), diecut pink layer and some of the embellishments with Victorian Velvet DI, and I coloured my white pearl paper with it as well then cut out the flowers. The blue layer and pink patterned layer behind are from my bit box, I did wonder about the blue layer but I think it makes the card pop.

On to the Marianne dies I've used:
the blue trellis layer and pink mat behind it, together with the text layer and swirl are all from LR0236,
the little heart is from the new Collectables Candy Hearts set COL1307,
the skeleton leaves are from LR0156 with added Stickles to catch the light and tie in with her wings,
and the flowers are created from the smallest die in the LR0145 by snipping each petal in towards the centre then rolling the edges and finishing off with a tiny pink pearl.

The Creative Card Crew have a girly theme this week, Stamptacular Sunday have Fairy Fever, and over on the Allsorts challenge it's for flower power.  I woke up several times in the night with the cough and feel drained today .. .. so think I'll go back to bed now and catch up with you all a bit later on.
Posted by Annie at 9:32 am