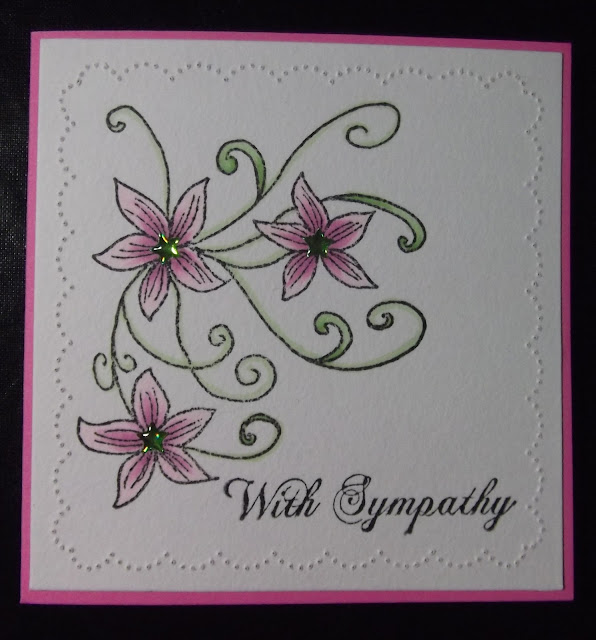 My uncle died last week, he was a couple of years younger than my Dad who died 18 months ago, so they were both around the same age in the end.  He had been a little poorly but at the end he just fell asleep in his chair, never to wake up.  I made this card for Mum to send to my aunt.  The family has drifted apart and as the funeral is in Kent it's too far for Mum to travel, and they didn't come to Dad's funeral .. ..

I had the pricked edge already in my bit box but as it was done on a textured piece of white card I was dubious about stamping and colouring with my Copic pens.  I think it worked out ok and deliberately went over the swirls with the pale green not minding if the ink bled.  The little green stars in the centre of the flowers are flat embellies from years back but work and don't add to the postage.  The stamp is several years old and I can't remember where I got it, there is a slightly larger flower as part of the set.  The text is from a tiny set I got at a craft fair a couple of years back.  I used the bright pink SU! card to create a little square and then added a white insert for Mum to write on, I thought pink would be ok as it was going to my aunt.

Totally Gorjuss have a KISS challenge so I'll link up with them.  The bugs are winning with me at the moment and I feel awful, the coughing is taking it out of me and I fear that I might end up with the lung infection I had several years ago that really knocked me for six and led ultimately to the ME diagnosis.  I'm going to have to take it easy, maybe do a little crafting and ease back on the DIY for a bit .. .. those hall doors still need to be painted though.
Posted by Annie at 12:34 pm