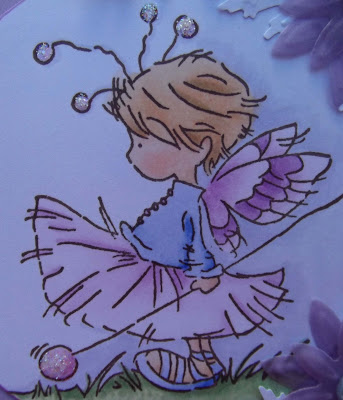 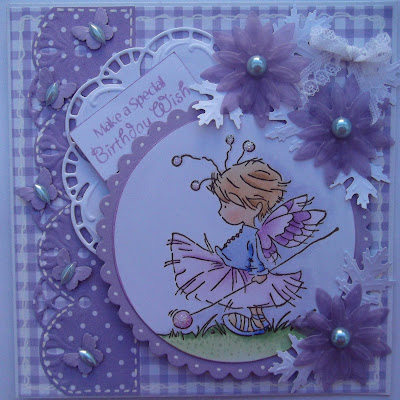 And here is my card. I've used lavender gingham paper from my stash, inked the edges with a lavender chalk in then doodled my stitches. Then I cut a white Marianne doily circle, LR0130, and the new embossed scallop, LR0201, layer to pop behind my image. To embellish I cut the Marianne daisy flowers, LR0106, out of vellum then added the punched oak leaves and little Nellie's Choice punched butterflies, finishing them all with pale lavender blue pearls. I almost forgot the lace part of the challenge so quickly tied a lace bow to add, although you could say my circle and scallop edge are also lace elements.

As this is my first week as part of the Lili's Little Fairies DT I'll be posting my card for CCT later on .. .. In the mean time, why not stop by the LOTV Ideas to Inspire blog where you can add your name to the Weekly Candy list for a chance to win fabulous LOTV stamps!

Today is a good day, we heard that we have got the planning permission to build the extension to the bungalow, albeit with some restrictions, but at least now I can go ahead and get builders quotes. Jason has almost finished tiling the kitchen area (he took over as the last bit involves lots of cuts) so I'll be grouting again later. We settled on a mellow green for the kitchen and have painted the bit above the window to make sure .. .. now I need to find a fabric to make a roman blind and prep the rest of the wall ready for painting (peeling of paper -yuk).

The Flutterby Wednesday challenge this week is an open theme, so I can enter my card with them. Crafty Catz want you to use something new on your creation, mine is the new Marianne scallop die. The ABC challenge is H = Happy Birthday so I can enter with them too.
Posted by Annie at 12:47 pm