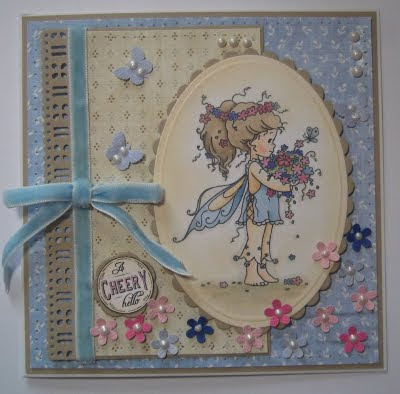 This is probably the last card I'm going to be able to share with you until after I've moved. Most of my belongings are in boxes, and a fair amount is already down at Mum's. I am planning on being there before the end of August and hopefully my husband will be along shortly after, once the loose ends are tied up here. It's been a stressful week or so and my health is suffering a little, so when I'm not filling boxes or travelling across the breadth of Cornwall with them, I'm collapsed in a heap!

Anyhow, this little cutie has been half finished on my desk for over a week and this morning when I finally got to catch up with the crafting world, I saw that the theme on the Cuddly Buddly digi challenge for this week is petals and pearls so added a sprinkling of both. The image is another of the Wee digi designs and the papers are from a magazine matted with kraft cardstock. I've coloured my cute little fairy with Copics then inked the edges of the image with Versamagic pale brown chalk inks to take off the stark white. But, as it was so long ago I coloured her in I can't give you a definitive list of the colours I used, but I can say the pinks are mostly R81 and R83, the blues are the B91, 93 and 95, and my usual skin tones are E000, 00 and 21. Her hair looks like E41, 42, 43 and maybe 44.

As I've not been around for almost a week I'm not sure if I can enter any other challenges with my fairy card - perhaps you can let me know .. .. I hope to be able to come back and catch up some more later this week.