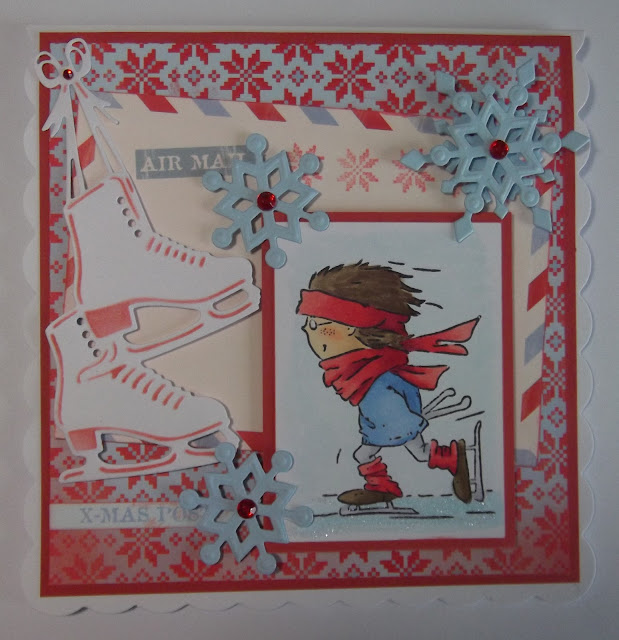 We had no internet access again yesterday and it's a little bit iffy today, fingers crossed I don't loose you before I can press the publish button!  This is another Marianne card with the skates die that I recently won and the freebie Skating Don stamp from the Papercrafts Essential magazine.  In addition I've used papers from Eline's Scandinavian Winter paper bloc and diecut the snowflakes from scraps of blue card.  Then I've stamped the little red snowflakes that came on the Eline's Owls clear set of stamps across the cream paper layer and finished off with the little red gems. This card is a lot less fussy than some I've made recently but hopefully still works ok.  The Marianne dies on this card then are the skates LR0247, and snowflakes LR0123 amd CR1227. 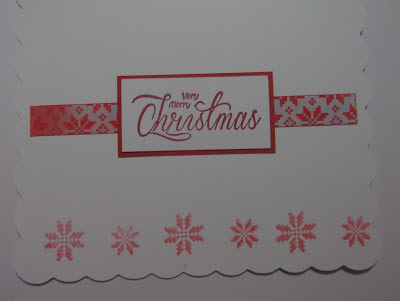 I don't tend to do much on the inside of my cards, a little stamped text and maybe a stamped image that doesn't need colouring in.  This time I had a tiny scrap of the paper left after I trimmed for the card so rather than bin it, I stuck it inside under the text that originally I'd planned for the front, but it didn't look right, and finally added the stamped snowflakes along the bottom edge.

The Winter Wonderland blog have a red and blue colour theme so I can enter with them this week, and the My Time To Craft blog as well as the Fab 'n' Funky blog both have a non traditional Christmas colours theme, hopefully red and blue is on the mark for them.  And I just saw on Squirrel's blog that By The Cute and Girly also have a red, white and blue colour challenge for December!  Then there's also the Marianne Design Divas challenge that's still got a few more days left to run with the theme of a card for a gentleman, and seeing as you can enter more than once this will be my second go with them.

It's a miserable day here in Cornwall, and I thought we were supposed to be having a break from all this 'weather' .. .. I need to get a couple of DT cards made for the run up to Christmas then I'll have to start thinking about clearing the table and tidying up the dining area before my guests arrive for the holiday - I'm cooking for 10 this year .. .. that's a lot of veggies to peel and a big turkey to go in the oven!  Sometime this week I'll have to start thinking about a tree .. .. not sure if a real one or go buy a fake one .. .. I do like the real ones but they are getting so expensive and the fake ones are getting better looking and cheaper each year - decisions, decisions!
Posted by Annie at 2:41 pm